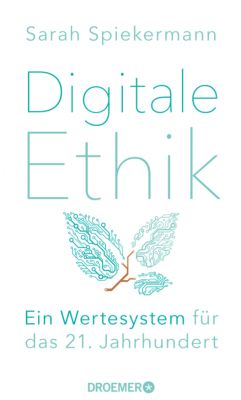 A system of values for the 21st century

„Spiekermann’s range of insights is remarkable and captivating: she takes us from Silicon Valley, to Aristotle’s ethics, to the history of the West’s faith in technological progress, to fundamental questions of knowledge and human values. This book is at once soaring in vision and utterly practical in application, an essential guide to cultivating good lives in the digital age.“
Jeffrey Sachs, Columbia University

Real progress must be more than a technology sandbox that destroys the tried and tested for a little bit of efficiency and comfort. It should be about bringing positive human values to fruition, which everyone welcomes, instead of stuff that takes time. Working on these values is the new “organic” in digitalization. But "organic" has not yet arrived in computer science. This book outlines what it could look like and how the great currents of ethics in philosophy could be brought to bear in this process.

The sad truth, however, is value-laden technology alone is not enough for real progress. One can indeed demand many values in technology, such as more transparency, accountability, privacy, security, etc. But ultimately we, users and citizens, are jointly responsible for making our daily use of digital services more conscious, just as we do in many other areas, such as cars and alcohol. The path of values in digital ethics is therefore ultimately a virtuous one. The virtue-ethical digitalization path is described in this book in four stages: The first stage consists of the intelligent recognition of one's own value goals in dealing with the digital; both privately and in the company. The second is a deep understanding of these values. What do they really stand for? The third stage requires new habits and the courage to live value priorities. And finally - fourthly - the willingness to refrain from destroying value.

If companies were to follow such a digital ethic, platforms that today turn apps into bosses and exploit people digitally could become positive communities in which people are loyal and satisfied. Robots and artificial intelligence could become polite coaches that promote freedom and knowledge in each of us instead of patronizing us. Health platforms could multiply our medical knowledge a thousand times over without privatizing knowledge and hawking our personal data. Mindfulness in dealing with the digital would take us so much further than all rights catalogues or lessons combined.

But there are great hurdles that stand in the way of this positive future: The first hurdle is our modern thinking, where the precious has been banished. We have been brought up to equate progress with inventiveness alone, rather than with true value creation in our daily lives. We have been taught across the board that new = good, old = bad and reason = observable facts instead of valuable action. The second hurdle is the storytelling of the IT industry, which exaggerates the capabilities of the digital without revealing the disadvantages of the new material. The nature of the digital is always incomplete, flawed and divided. It separates content and form and is deliberately created in a way that makes us dependent and unfree. Only when we understand such limits of the digital and the interactions with us humans, can we develop a healthy expectation of the actual performance of the digital material. Only then can we work on real progress.